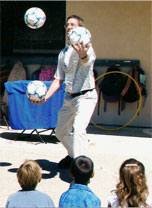 What is it about juggling that is so mesmerizing to watch?

Is it the act of defying gravity?

Or is it the artistic motion of all those objects in the air? 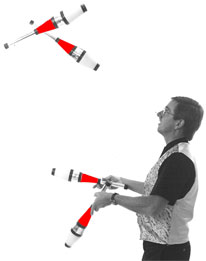 Maybe it’s wondering if the juggler is going to catch himself on fire with those flaming torches he’s tossing in the air!

Whatever the reason, juggling is fun to watch.

When you add the element of a volunteer being placed in a situational comedy setting,
you now have a “show”.

Whether it’s a formal show with a seated audience

or a crowd of people waiting in line at an event,

The bottom line is the same: people were entertained, volunteers were used and a memorable experience was had! 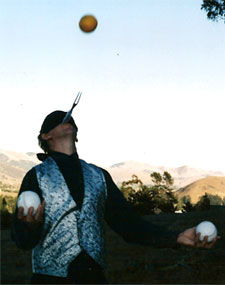 Paso Robles to San Luis Obispo and onward to Santa Maria and Lompoc, our jugglers have become a favorite on the Central Coast of California. For years crowds enjoyed our street performing routines on Thursday nights during the Summer at the Farmer’s Market in San Luis Obispo. The venues where we now perform include:

Here are a few of Jim the Juggler’s favorite juggling routines:

Calls us. We’d love to talk to you about your upcoming event. We can discuss the time and date that you have scheduled and reserve that time period just for you. (805)547-9015